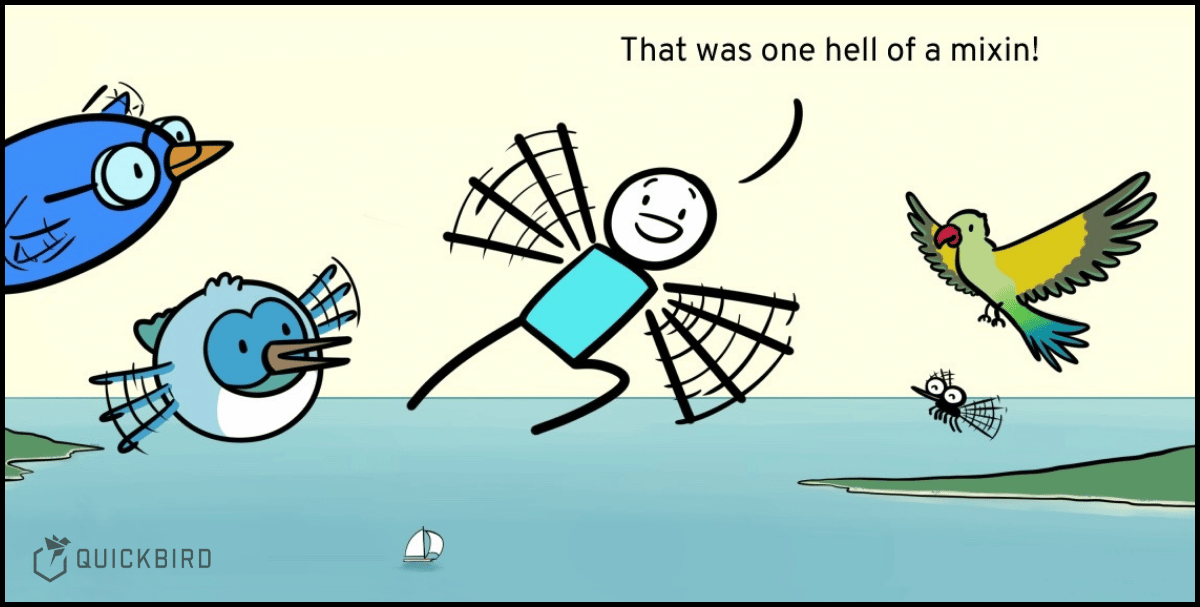 Use Dart Mixins More Often! Here is Why…

Mixins are a super-powerful feature in Dart and if you’re developing apps with Flutter, you should use them more often! 💙 In this article, we’ll show you why – and how.

Mixins are awesome because they solve a basic problem that comes with inheritance. They are an elegant way to reuse code from different classes that don’t quite fit into the same class hierarchy.

A mixin is a class whose methods and properties can be used by other classes – without subclassing.

It’s a reusable chunk of code that can be “plugged in” to any class that needs this functionality. Mixins are supported by Dart, and Flutter uses them in many places. As a Flutter developer, you are probably familiar with the SingleTickerProviderStateMixin that you need to use when creating animations in Flutter. We’ll get to that later in this article. But first, let’s take a closer look at the problem that mixins solve!

Do you know what Flutter’s mascot Dash and our team’s mascot QuickBird have in common? They both love to flutter around the world! And sometimes, their common friend Parrot joins them and they all flutter together. How would we model this in an object-oriented programming language?

Obviously, all of them are birds. They all have the same abilities: They can flutter and chirp. So it’s reasonable to have all three birds inherit from a common superclass Bird. Only our QuickBird is a little special: It can also write awesome blog posts. 😉 In a diagram, our class hierarchy would look like this:

After some time flying around, our three birds make a short stop in Mexico where they make a new friend: Mosquito. Mosquito is also a master in fluttering his wings. Dash, QuickBird, and Parrot want to welcome him into their Bird group. But it turns out he’s not a bird after all! 😯 He can’t even chirp! Thus, he can’t really join the bird’s class, so they decide to create an additional superclass FlyingAnimal. Let’s add this new superclass and Mosquito to our class diagram:

We also create a subclass Insect as our group of flying animals might encounter others who are like Mosquito. The FlyingAnimal class provides the common ability to flutter. The Bird subclass adds the ability to chirp. With that new class hierarchy, the four animals continue their journey.

They touch down for another stop in the Bahamas. At the beach, they meet a guy who catches QuickBird’s attention: He’s definitely not a flying animal as he doesn’t even have wings. But he’s enthusiastically hitting his laptop’s keyboard writing a blog post, so he seems to be able to write, just like our QuickBird. Let’s include the human in our class diagram:

Now we have a problem: When implementing this in code, we would want to reuse the functions flutter(), chirp() and write() in all classes that offer the respective functionality. In object-oriented languages, code-reuse is done through subclassing. But we cannot create a common superclass for Bird, Insect, and Human that provides all the methods required by its subclasses.

As you might have noticed, the structure is also getting more and more complicated, making it harder to understand and maintain in the future. To solve this problem, we need a way to reuse the code in multiple class hierarchies. The first thing that comes to mind is to allow classes to inherit from multiple superclasses, but multiple inheritance comes with the diamond problem and it’s not supported in Dart. Instead, we use mixins!

With Dart mixins, we can reuse our code without any restrictions in multiple class hierarchies. Let’s try to remodel our class diagram with mixins! First, we create a FlutterMixin that provides the ability to flutter. We inject it into our Bird and Mosquito class. Next, we define a ChirpMixin that we only inject to the Bird class and a WriteMixin that we inject to the QuickBird and Human classes. (We only show the code for the first mixin to illustrate the syntax.)

Mixins can be defined with the mixin keyword or via a normal class declaration.

As you can see in this example, both methods and properties can be defined in a mixin. The on keyword describes which inheritance structure the mixin can be used on. In this case, the FlutterMixin can only be used on Creatures. You don’t have to restrict a mixin to a certain class, but it’s often useful to keep your future self or another developer from mixing in functionality to classes that absolutely have no business dealing with this functionality. (For example, a mixin to edit and publish blog posts should be restricted to a BlogAuthor class, so that no one can accidentally add the EditMixin to a BlogReader.)

To add the mixins’ functionality to the Bird and QuickBird classes, we use the with keyword:

Now, we can use the functions that are defined inside the mixins. Example:

How Mixins Fit Into The Inheritance Hierarchy

Let’s take a moment to reflect how we modified our inheritance structure with the mixins:

Now that we’ve mixed our QuickBird class with so many mixins, what’s its actual type? How are the mixins inserted in the inheritance hierarchy? Let’s check that in code!

As we can see from the output, mixins are polymorphic, just like classes. A class assumes the type of its ancestor classes and also the type of its injected mixins. If we take a look at the inheritance structure at runtime, we can see why it works this way:

Every mixin creates a new class/interface at runtime that is inherited by the next class in the hierarchy. The order of the mixins matters as it specifies the order in which the mixins and classes inherit from each other. As a core rule, the inheritance hierarchy always reads from right to left in the definition of a class:

As mixins are integrated into a class hierarchy at runtime, they can also override methods. Here’s an example:

will call the move() functions of all the superclasses in the hierarchy and print the following output:

When we call the move function, the SailMixin‘s implementation is called first as it’s the first mixin from the right. As it calls super() first, the move() implementation of the next mixin from the right (the FlutterMixin) is called before printing the output. Again, it first calls super() super which executes the move() method on Bird. So the Bird‘s message is printed first, then the FlutterMixin‘s message and finally the SailMixin‘s.

If we change the order of the FlutterMixin and the SailMixin,

the output changes as follows:

If we wanna go nuts, we can even include the same mixin multiple times in a class:

The output will be:

In this case, the order of the mixin specification doesn’t matter anymore as both mixins are the same. But is there any real-world use-case for this? No idea. 🤷 If you find one, please let us know on Twitter! 😉

When to Use Mixins

Now we saw that mixins can be a really useful tool to share properties and behaviors across multiple classes, let’s have a look at the mixins TickerProviderStateMixin and SingleTickerProviderStateMixin. Both are used for explicit animations in Flutter. By specifying one of these mixins in our widget definition, we tell Flutter that the widget is animated and that we want to get notified for frame updates so that our AnimationController can generate a new value and we can redraw the widget for the next animation step.

One other area where mixins are heavily used in Dart and Flutter is JSON (de)serialization. Writing methods by hand to serialize and deserialize a data class is often error-prone and a repeating task. That’s one of the reasons why many developers resort to code generation tools to create that functionality. With mixins, the generated code can be easily included in the original data class.

There are many more examples where mixins are super useful, for example:

Where would mixins benefit your project?

This all sounds very promising, like a secret tool to rule them all. But what are the downsides? One main issue (as with any programming technique) is heavy over-use: If you start to rely on mixins only without the “good old” inheritance, your classes will soon look this:

In other words: Mixins make it very tempting to include all sorts of functionality in a single class. But when a class can do too many things, it violates the single-responsibility principle and it’s hard to keep an overview and an intuitive understanding of the class’ purpose. Furthermore, it can become pretty confusing which method was inherited from which mixin and it might not be clear to other developers in which order the code is executed.

Mixins don’t replace inheritance. They extend it. They patch some of its flaws. Use them wisely and always consider subclassing as an alternative. But in our experience, mixins are still heavily underused and underappreciated. So if you find a good application, don’t be afraid to use them!

Do we really want to end like this? Leaving our human friend behind with his laptop in the Bahamas? Of course not! Now that we have our FlutterMixin ready, we can simply add that to the Human class as well and give him the ability to fly. And the sky is not the limit when working with mixins. 🚀

In this article, you’ve learned what mixins are and what problems they solve. We’ve shown you how mixins integrate into the class hierarchy and a real-life example that you typically use with animations. At QuickBird Studios, we believe that mixins are a powerful feature in Dart and should be used more often in production apps. If your company needs a developer team to implement a Flutter app, reach out to us at [email protected]. Building cool Flutter apps for other businesses is what we do at QuickBird Studios 💫

By the way: Another great feature for adding functionality to classes are Dart Extension Methods and we’ve covered this topic in another article. Thanks for reading! 😀

Do you search for a job as a Flutter Developer?
Do you want to work with people that care about good software engineering?
Join our team in Munich